Episode 3 of the podcast has, believe it or not, been posted, apparently without incident. Jo and Ro and I discuss graven images, hypocritical christians, a lack of semantic clarity, and random free-floating hostility.

You can find a link to the RSS feed on the right side of this page, or just click here.

If that's too many steps for you, here's a direct link to the actual audio file

You can also get the iTunes feed here, and folks are encouraged to subscribe, as that way it will just download automatically. The feed usually takes a day or two to update, so be patient.

I will confess once again that I pretty much have been ignoring livejournal for months now - let my pay account expire and everything. But I have something to pimp, so I'm back at least momentarily.

Two friends of mine and I have just recently started a podcast. Very recently in fact, as there's only one out so far. The 'cast is called Blasphenomenology. We have a home page here, an an RSS feed here, or you can get it on iTunes by following this link.

The Blasphenomenology Podcast is an attempt to examine religion and its effect on modern society, from the perspective of an outsider. In practice, this amounts to three bitter ex-catholic atheists chatting about religion, and religious people, and faith, and the like, wth considerable snark, amazement and giggling.

The first episode, which was posted on January 21, 2010, dealt with a recent Pew Research poll about religion, faith and belief, which showed some very strange numbers, and the Jesus guns debacle that's been in the news recently. The second episode will be recoded next week.

I'd love to get some feedback, and of course some listeners, so please check it out!

edit: Oh and p.s. we also have a twitter feed For those interested who are not on FB, I have posted some pics from the Faerie Festival last weekend. Pics are in my Flickr here: http://www.flickr.com/photos/ratbastrd/sets/72157617879640505/
Protestors, belly dancers, people in wings, mossmen, general silliness... 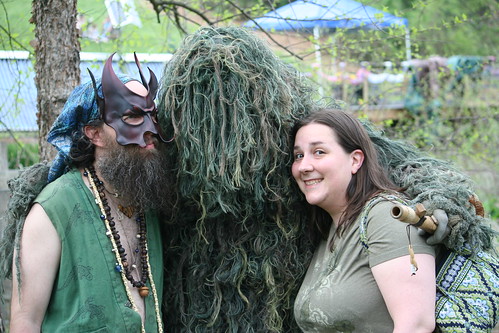 for anyone still on lj that doesn't know, i've got a twitter at http://twitter.com/RighteousAngst
i cant promise its very exciting.

Took a few pics this weekend at Bunnypop's birthday, which mostly consisted of an epic Munchkin game that ran until everyone got tired.
http://www.flickr.com/photos/ratbastrd/sets/72157617174099406/

trying to write a poem, which i haven't done successfully in years.
This entry will be updated continuously as I get anywhere. i'm just posting what i have as i go along, so anyone who cares can follow along and see what a doggerel-spouting and uncreative ass i've become...

The silhouette of a hated present tense
casts shadows on the ever deepening past.
Each passing moment lost to contemplation
of reflections on the coming waves amassed.

An aesthetic air of studied waste and wear,
Sipping of ephemeral eternity.
The only cost, a lifetime's simple meaning,
the devil's details of mass and modernity.

Read the tangled entrails of a universe
as reflected in the bottom of a glass.
Feel the cycles of the world's forest for its trees,
yet never see a single blade of grass.

SHOCKED I AM! SHOCKED!

Are You A Republican?

Is there any way to de-static my apartment short of ditching my rugs and cats? I'm tired of my girlfriend and I electrocuting each other...